When I first returned to Ohio in 1980's I worked mainly by myself. One of the avenues I was working toward was creating figurative art from fabric. By 1998 I found a newly formed doll club called The Guilded Lilies. One of the founding members was Liz Seibold.
This picture is of her and the Guilded Lilies with their charity dolls in 2007. Every year the group makes Dolls for charity, and every year Liz paints the faces on the dolls for those that are too shy to paint the faces on their own dolls.
Liz is a fabulous artist. Her first love is painting and more often than not she merges her painting skills with her creations of art dolls. Most recently I have been taking lessons from her. Painting on cloth is just not as easy as it looks. Here is some of her work. 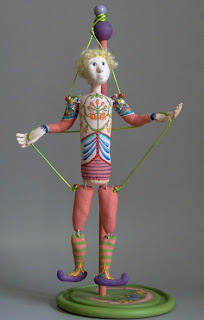 This is a perfect example of the way Liz brings her first love of painting into her art dolls. Jumping Jack is based on the old time Jump'n Jacks that would dance when you pulled the strings. This too dances. The body is made from solid white fabric and each body part is painted. That is right completely painted, with the exception of the hands and head. Liz of course made and painted the stand, so that Jumping Jack could be displayed properly. 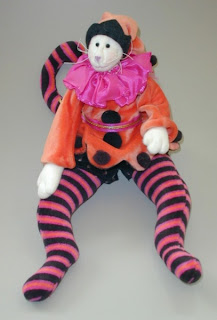 Liz loves whimsical animals. Her color pallet is usually in pastels but she does not shy away from bright colors if the project calls for it. Creating something simply for the fun of it is more or less her motto. She does not think you always need to be so serious when working. Do your best yes but have fun doing it. You can tell she has fun just by looking at her work. This cat is a sure fired example of just how much fun she has in her sewing room. 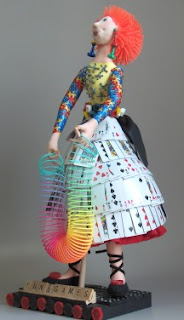 A challenge dolls "The Object of My Obsession" The idea of this challenge was that Art dolls was your obsession and the object in this art piece is GAMES. Liz has made the skirt from playing cards and has integrated, jacks, domino's, Slinky's, crazy balls, checkers, scrabble, puzzle pieces and a few dozen other games. You can look at the Art doll named "Games" and be amazed in all the different ways the game parts were used and applied. Who would have thought that your old board games could be used in so many different ways.

Liz creations often are a mixture of techniques. In this Art doll she has added beading, quilting arts, painting and doll making. The skirt was made by layering fabric, quilting batting and fabric. Creating a thick padded skirt in several different pastel colors they were then beaded at the base of each skirt. The base of the stand is painted. 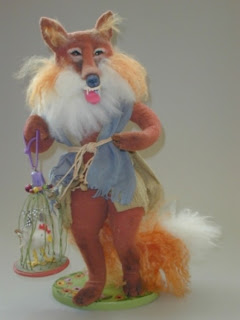 She can design her own work but that does not stop her from taking classes. This is a creation from a Jo Ann Trilling class. It was an open class and all the students created there own animal She loves to learn new techniques and then puts her own spin on them. I think you will agree her work is totally awesome.
Posted by Cyndy Sieving- Reporter at 5:31 AM