The Art of Desgin -Stephen Rausch

﻿﻿﻿
﻿﻿﻿
What a charmed life it must be to work in a field that you love. Then retire and continue your life creating amazingly art in a new way and new format. This seems to be Stephens’s story and what a story it is.

As a young man Stephen graduated with a BA in Spanish and Theater Arts. He moved to Cincinnati Ohio and a friend of his had a small dance wear business. After he joined him they added costumes. Soon the costuming out sold the dance wear. They built this small company into a business named Schenz Theatrical Supply Inc. one of the largest theatrical costume companies in that region.

Over the years the company costumed universities, the community and high-school theaters. Their customs graced to likes of the Ringling Bros and Barnum & Bailey Clown College, PBS specials for Orchestras, several museums displays. The list is endless and it goes on to including the Cincinnati Symphony, Opera, and Ballet. 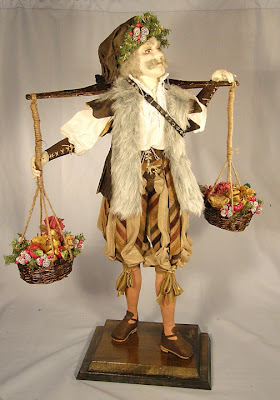 Stephen believes that a great influence in his life was J. Edgar Joseph, the head of wardrobe for New York City Opera. Meeting him early in his career he always looked upon him as a mentor. It was from him he learned two important lessons: attention to detail and costume design. He learned not only to pay attention to the cloths, but also the manners, and historical content of the period.

Stephen designs and creates absolutely everything for his dolls. He designs the clothing sculpts the doll, makes the furniture and sets their seine. It is an overall theatrical look paying close attention to each and every detail Stephen produces a spectacular art doll in an environment fitted to the time period. Stephen gave us a little inside information on just how important designing is for the overall look of his dolls. See more of Stephen's work click here 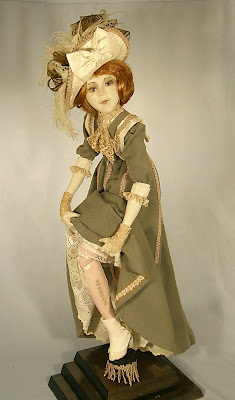 "The Flirt - Lucille Adjusts Her Garter"
If there was only one bit of information that I could pass on to present and future doll artists, it would be the importance of studying the cut of the period costumes and how that cut, in conjunction with the fabrics used, determines the drape of the garment. As an example, The Flirt-Lucille Adjusts Her Garter” is dressed in an afternoon visiting suit from about 1908. She is daintily lifting her skirt and petticoat to expose her garter stocking. The skirt cascades in a very fluid S-shape. This was achieved by cutting the skirt as it would have been cut in 1908. One could never achieve this look by simply taking a width of fabric and gathering or pleating it to fit the waist. It is all about the cut, the fabric, scale and proportion.


Stephen will be teaching Designing and Patterning Period Clothing at Artistic Figures in Cloth.   We have anticipated a demand for his classes.  Stephen will be teaching the same one day class for three days straight. It is a good thing we signed him on for all three days, his class has been popular.  It is rare that you are able to bring on a Art Doll Designer that has the in depth knowledge about period costuming and understands how to scale the pattern down to fit a small figure such as a doll.
Description and information on the class below "Designing and Patterning Period Clothing click here. 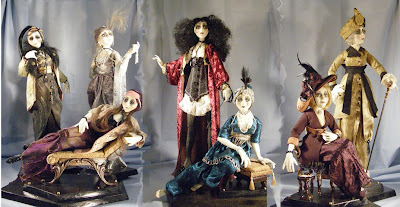