In the Beginning there was Gloria Winer

﻿﻿﻿﻿Gloria was not the only cloth doll maker blazing trails but it sure did seem like it to me. ﻿﻿﻿﻿I didn't meet Gloria until 2009 but I had known of her long before that  In 1997 I decided to see if anyone out in the world had the same desire to make cloth art dolls besides me.  Thanks to the Internet, one lone voice was calling out to me,  it was Gloria Winer.  She seemed to know everything about art doll making across the . Years would pass before I took my journey and developed Artistic Figures in Cloth Convention, but can you imagine how excited I was when Gloria submitted a teaching proposal for the 2009 workshops.  Now she is returning to AFIC 2011.  Gloria has come up with a mind blowing 3 day class called “High Priestess Drawing Down the Moon”   If you wish to see Addition pictures & infor. on class Click Here
I ask Gloria to share with us her memories of dollmaking. Gloria told me she made her first doll in 1982 a pattern by Ester Lee Foster. Then she learned to sculpt a form and drape it to create a pattern from Lenore Davis.  This is where her journey began. I am sure at that time she had know idea she was about to start down a road of no return.  Gloria became one of strongest voices in Cloth Art Doll making and here is how it all began. 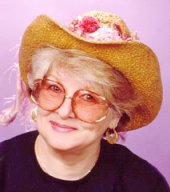 A Story told by Gloria “MiMi” Winer
Barbara Willis and I were thinking back about Judy Waters.  I mentioned to Barbara that Judy started dollmaker seminars way back in 1989. The first one was named "Dreams Do Come True", after that they were called    Barb said no, it was not Judy who began the cloth doll symposium; she reminded me that I had the first one in back in 1987.  I had forgotten about that one. Here is how it all began;
I wanted to study with artists whose work I admired but could not afford private classes.  In 1985 I called Lisa and asked if she would teach a class on how she made her heads. I asked the duration and the cost. She said $100 per day for five days. I quickly asked "per student right". She thought about that for a second and said yes, of course...So I invited three friends, none of whom I had ever met but we were phone and pen palls. They were Sandra Blake from , Marcela Welch from and Judy Mahlstadt from . Those five days were amazing. We didn't even finish a head but the class turned into a group encounter. We all know far too much about each other to ever not be friends.
I began to invite many artists to teach at my home for 10 or 12 students. I did this for about ten years. I had recently had Lisa Lichtenfels followed a few months later with Noni Cely teaching four and five day classes at my home. When I learned that neither of them could afford to attend NIADA in that year I was worried. At that time there was no other venue for selling art dolls in their price range. The collectors every year gathered in one location for NIADA, ODACA and UFDC convention.  There dolls could only be seen at the NIADA salesroom.
I called a friend in and asked her to help. In exchange for free classes with either Lisa or Noni, she offered to put up Lisa, Noni and myself at her home. She found a studio nearby we could hold classes. I got in touch with a motel near the studio and next door to a Denny's restaurant. I made arrangements with the hotel and the restaurant for rooms and meals, rented the two classrooms at the studio. I put a little notice in Cloth Doll Magazine, the only one we had at that time. Both classes filled quickly with waiting lists.
While I was registering folks, I noticed that there were several driving the 400 miles or so from the Bay area. I gave each of them the other numbers so they could arrange to share rides. They filled several vans and caravan down to . That was the beginning of several long time friendships and a couple of doll clubs that are still going strong.
Lisa and Noni had their transportation paid to LA, earned more than enough teaching; enjoy visiting the area for a couple of days and to attend the NIADA convention after classes ended. They both sold dolls as well.  To save on hotel bills Lisa Noni and I shared a room and at the last minute elinor peace bailey joined us. You can imagine all four of us with all the dolls and luggage in the same room. It was a bit crowded but lots of fun. I introduced elinor to Susi Oroyan who was president that year and within an hour elinor was giving a speech to the entire convention and throwing dolls into the audience. The rest is history....
﻿
﻿
﻿﻿﻿﻿﻿﻿﻿﻿﻿Gloria’s most recent trail blazing release is her DVD “Needle Model a Pretty Face”.  (Click here to read more about the DVD).  Gloria will be doing an on hands demo of face sculpting free to the public on April 30, 2011. The demo will run from 4:30pm – 6:00pm. If you can’t make it to the convention as a student, pack up a gang of doll makers and make it to the hotel as a visitor. See Gloria’s demo and a chance to meet her in person.  She is a wealth of information. There will be lots of activities that Saturday at Artistic Figures in Cloth,  including other demos, exhibits, vendors, and artist.