What I did this summer. 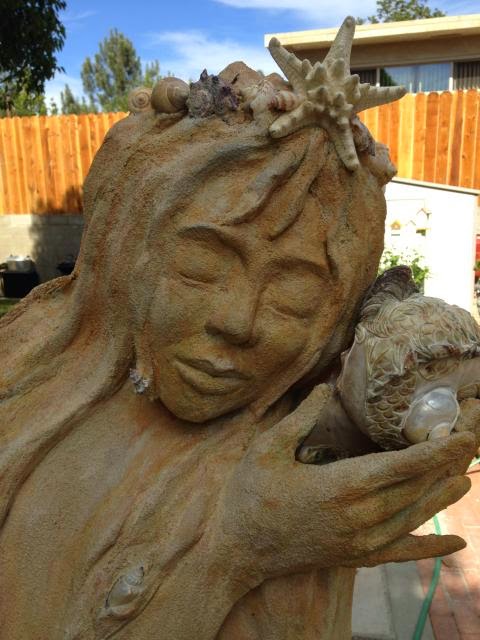 I did a lot of things this summer but this story is not about me.  I want to share a story about Roxanne Maria and her huge summer project.  Roxanne Maria is one of the instructors at Artistic Figures in Cloth & Clay 2015.

When I first met her I was impressed with the detail and movement she put into her art work.  I had no idea just how impressed I would become.

Roxanne was a young girl,  living off the Florida coast. She was told a story of Yemaya and a small prayer in Spanish to say before entering the ocean waters so that Yemaya would protect her . The folklore is a mixture to Cuban and Ancient African beliefs. Yemaya is believed to be the mother of the seas, a grand goddess and a mermaid by the Haitians. She has many names one is La Sirren and Timbre del Mar which means sounds of the ocean 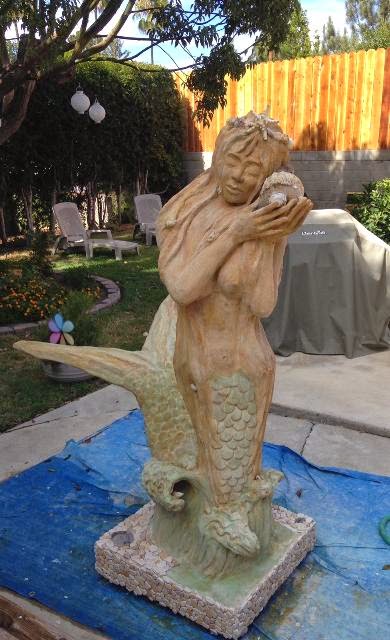 This summer Roxanne sent me pictures of her project in production.  Roxanne shaped a Mermaid from concrete and rebar!  You read correct concrete and rebar!  Not a small mermaid either this is a 6 foot tall mermaid.  I can’t even wrap my mind around this project.  Where would you start? How would you map this out?  How do you hand sculpt concrete with all these little details?  How would you move it after you are done?  I was so impressed with this project I decided to put her first on my list.
At the end of August she sent me the final pictures before it when on exhibit.  She made this wonderful sculpture for a San Diego Sculpture Exhibit fund raiser which focus was on the Preservation of Marine life around the world.

I am sure you have seen her work in magazines and on line Today Roxanna Maria resides in San Diego, California and continues her artistry in the creation of one of kind dolls. Roxanna’s work has been featured in national and international publications such as Art Doll Quarterly, Pretty Toys Magazine, Doll Reader, Contemporary Doll Magazine, Doll Making, Doll Collector and more. Roxanna Maria Sullivan is a member of The San Diego Sculptors Guild, located in Spanish Village at Balboa Park, San Diego, California.
I am very excited to present Roxanne Maria as a teacher April 2015 AFICC.  She is teaching her adorable "A Rabbits Tail".  The art piece is Mixed Media for Intermediate to Advanced students in polymer and felting.  To see more details and close up pictures of her workshop.
Click here.

Posted by Cyndy Sieving- Reporter at 11:58 AM